So, I love the Giles Milton for a number of reasons. The first, because of the historical research that has been done to complete the book, is just phenomenal. Second, Milton mixes humour into factual fiction in a semifictional narrative. Which leaves you panting for more.

When you hear about the kinds of characters that are written in all the Milton books, you wonder if any of it is true. I spent a few hours skimming Google to find out that these characters are real, the locations and the exploits are also real.

Testing weapons in Richmond Park. Turning up in Warsaw after the Nazis had invaded trying to look inconspicuous while wearing Scottish troose (tartan trousers) and a full tweed ensemble with monocle to boot is something that had me roaring with laugher, a little confused how their contact knew who they were was a mystery to them.

These guys are the thing of legends, the early spooks that made up the fledgling years of MI5/6 and the special forces that are so well known now. These guys wearing nothing but the bare essentials, no support with limited weapons, took the fight to the Nazis in such an ungentlemanly way that Wellington and Napoleon would have been turning in their graves. This book is well worth the read and if you haven’t heard of Giles Milton, he has an extensive collection of books of which I have read all but one, and each one on their own merits is worth a read.

From a historical context, these books on are on the money, but coupled to this, the narrative is belly laughingly funny, the audio version on audible.com is superbly narrated. The narrator takes you through the mountains of Greece to blow railway tracks and bridges to starve the Afrika Korps military campaign in North Africa; the grenade used to kill the Reich Protector, Rynhardt Heydrich was impregnated with bacteria to ensure a grotesque death if just injured during his assassination. The detail in this book is is deep and textured, you can’t help but feel the book, experience the fear, the excitement and the pioneering spirit that banded these guys together.

There are aspects to the endeavours of these guys that will remain classified for an eternity and rightly so. The secrets that these guys took to their graves were things that turned the war around. Without the courage and dedication of a chosen few, without the pomp and circumstance, got on with their jobs and sliding back into the real world when their skills in the war were no longer required. Heroes, every single one of them. The exploits bleeding into the security of the USA, the genesis of what we now know as the CIA.

If you’re a fan of WW2 none fiction, or you just like a good yarn, hit the link and grab a fantastic read. 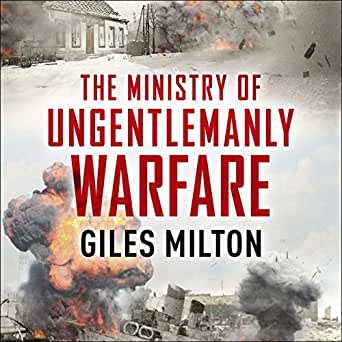