The complex plots and subplots of my book Harvester, one person accused me of the phenomenon of the ‘google author’ concept and that the life experiences that I experienced weren’t possible. This kind of inflammatory comment would’ve sent me over the edge in younger years, but I let it wash over me like a tepid tide, but it got me a thinking.

I think I own the most varied CV in the world. The only thing I left school with as a Sixteen-year-old, was a packet of fags, and an ancient dog-eared copy of Razzle magazine and a worn pirate copy of The Alarms – Declaration. But I had a drive that was coming from somewhere and a burning desire to shoot people. I got one O’ level though, in Biology, which came into play in later life.

I then spent the next ten years in the army. The Infantry, shooting things and being shot at. I grew up quickly while on the streets of Northern Ireland; they were tough, mean and dangerous. It shaped the person I became in so many ways.After that, I joined the family firm and became a potter. These are the times I miss the most. They were idyllic and perfect. Working amongst the rolling hills of Dorset in the South West of England, nothing could be more amazing. The business grew to where we had to sell up. I became a full-time dad to our young children, again, some of the best days of my life. My relationship with my now grown-up kids is a close bond of which I do not take for granted. It was during this period; I realised that the wind blowing between my ears was in fact cognitive thought. What was weird, I was pretty good at it? I guess this was my search for meaning, and I just didn’t know what to do.                                                                                                                               So I searched what would be a suitable job for a thirty-something to do that had substance and came across a career as an Operating Department Practitioner. I stayed on at university for another four years and became a surgical first assistant and getting a whole heap of post-grad certificates, which I can’t find anymore. I’ve covered everything in surgery from orthopaedics, which I love, to cardio- thoracic, neuro, general surgery, ENT, MaxFax, urology, obs and gynae. I am dual qualified in assisting and anaesthetics, which makes me a rare commodity. I can slot anywhere within the surgical setting and be comfortable.

What has this got to do with researching books?

I also can remember the first time that someone tried to kill me, the sound, the energy, the stones being flicked into my eye from the ricocheting bullets, the twenty litre can of water being tossed into the air as 7.62mm rounds slammed into the ground either side of me.

I remember I was about to be mortared, and when the first one came into my base, I saw glass almost bend concave slowly as the blast swept through until the glass surrendered and smashed to a thousand pieces. Why did I survive while others didn’t? I have no idea. Many friends who are not with me today, dead from enemy action, or even the biggest killer, the enemy within. These voices in my head, as does most of us that walk this path, I am not immune to the label of complex-PTSD, I won’t affirm to like it, but there it is.                        My body has spent most of its life in fight-or-flight mode, something that I am learning slowly to deal with, with the help of a therapist. Every day that my brother’s and I make it through another day is a day we can chalk up to success. I hope that this transcribes into the narrative of the books I write.

I am an educationalist by nature; I love learning and reading deeper into the psychology of people which easily turns me on. How people tick. We’re not all that unique. Humans are humans, and a large proportion are wonderful souls that want nothing but good from this life. The scum bags, villains, and psychos are these are the people I am keenest over, and this behaviour really inspires my writing.                                                                                     Take this current covid-19 pandemic, people are so predictable in how they behave, this fascinates me and use that core human interaction in my books. My protagonist Alex Brown is especially deft at dealing with human emotions on many levels, I love how she sees the lie coming, and heads the lie off at the pass, Alex is a character that has been through the mill. Psychologist’s would call hypersensitive, on a more spiritual level, you would call Alex an Empath. These are complex cognitive skills which learnt as an Empath myself. When you spend most of your life in the fight-or-flight mode, and living in what they describe as one of the 4F’s, your brain becomes like a sponge.

I hear the term Google Authors. That’s something that I definitely am not. 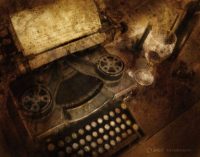