Talking of bad habits, I once I smoked, I know, horrible habit. I rolled my own. The smell of that tobacco, the ritual of crafting the perfect cigarette each time, took on the same diligence and etiquette as a Japanese tea ceremony. There was one fateful night that questioned my habit that was one of the driving forces to stop me from smoking.

Now we live in a very spiritual place. Shaftesbury, a stone’s throw from the famous Stonehenge to the east and to the west Glastonbury. Alfred the Great frequented the fields around where we live. The man that saw the Vikings off. The legend of King Arthur also tied to these lands, whether you believe in the mystical stories of Avalon or not, the Blackmore Vale where we live is part of this territory. And I am saying this for the very reason I need to give you some texture to the story I am going to imbibe with you, so sit back and drink up.

We were renovating a house in town, at the time the house was uninhabitable, so we moved in with the In-laws for three months.

My ritual of going to bed was to stand outside and decompress from the day. We had a fairly extensive business to run and two very young children. The night sky in the Blackmore vale is as mystical as the mist’s that roll off the Glastonbury Tor, the sound of hooves from the knights of the round table are still heard. It was glorious, the inky blackness of it peppered with the pinpricks of the stars. The same stars that I looked up to while in the army and on operations in distant lands. Then, I would look to these stars, imagining them shining down on my family, connecting me to them while working in some shit-hole of a country. Gazing at these stars is still a habit I do today.

The cows were moo’ing in the field opposite. The odd car whooshed past, the moon giving a blue tinge of light to the buildings that made up my in-laws’s house.

I drew in heavily, the nicotine firing up the cells throughout my body. The lighter in my pocket, also habit that I had picked up while serving in the army, was to strike the lighter in my pocket, click, click click. I was enjoying the smoke too much and realised that the smoke had come to the end too quickly. I looked up to the window in the house. The soft glow coming from the window told me that my wife was waiting for me to come to bed – click, click, click. I weighed my options, making love to her or smoke and the demon nicotine won every time. I sparked up… Click, click, click.

It was here that I regretted my actions. You see, I was wearing only one thing, and thick woolly (only 22% natural fibres, the rest was nylon) dressing gown, this habit of flicking the lighter in my pocket had created a fireball, the type of fireball that was witnessed in the reactor at Chernobyl. The gas from the lighter has permeated through the cheap fibres. WHOOMP went the dressing gown, like the gas BBQ, I skitted across the gravel drive trying to undo that ridiculously tied a double knot at the front, the type of knot so efficiently tied so not to upset the cows in the field on the other side of the road if it popped open and show my massive meat and two veg. Panic was rising in me, the flames tentatively licking around my face and burning off my eyebrows. The fibres were now properly on fire, all I could hear was the sound of rushing, like the flames were in a race to incinerate me, the heat slowly breaking through the fabric and eager to get to my naked skin, images flashed through like Buddhist monk Thich Quang Duc protesting against the Vietnam war in 1963, self immolation for me, was not a way to die.

I finally purchased the knot, luckily for me in the panic I was shouting SAM, SAM, SAM as fumbled. Suddenly, the knot gave way, and I slipped the garment off; I slammed it to the ground; the flames realising that it only had the material to consume and with renewed vigour; the flames devoured it. Jumping up and down to put the flames out, I suddenly felt the chilly night of the evening, sending a chill down my spine. The flames had extinguished, and I was basked in the white glow of some Xenon headlights. The type of headlights that were back in the day only fitted to high-end German type cars. Then wheel spinning…

I looked around and a large Mercedes car with German plates had managed to to spin in the road and was squealing off into the other direction, the direction of London I guess.

In the blind panic while I was on fire, I had made across the fifteen metre driveway to the main road. I managed to get the flaming dressing gown off in the middle of the road.

Picture this, high above my smouldering naked body, the face of a crazed lunatic, all the veins pulsating in my neck and face. The little hair that was on my head was still on fire. It had burned the rest of my hair off like a pig awaiting slaughter. My eyes bulging like some kind of obese toad. The full sphere of a very blue moon. What must those Germans have seen, screeching to a halt and watch this beast of Dorset, on fire… I wonder if they still talk about it?

The cows had congregated, all munching furiously with the same psychopathic eyes I had just had, wondering what this human fireball was all about. Maybe they thought I was their new God.

I wandered in the house a bit dazed, trudged upstairs, Sam was sat up reading, “is there something burning?” She said. I sat on the end of the bed. It had singed most of my hair off, including around the family jewels.

“Yeah, I think it was me,” I said with the smoke still trailing off the top of my head.

I still drive past the house. A small chuckle comes out every time I think of that night. 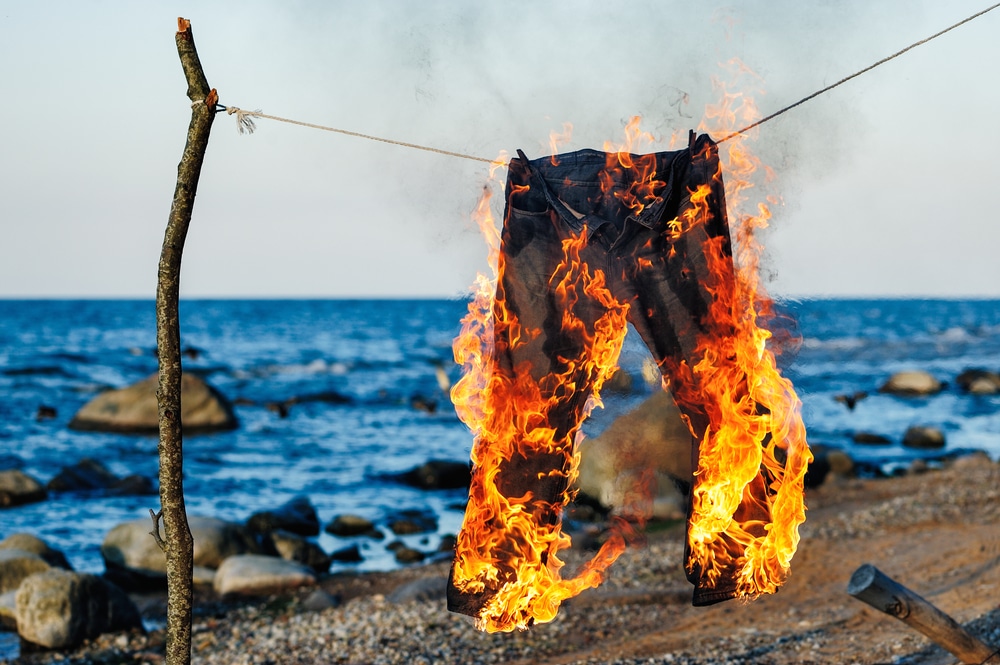